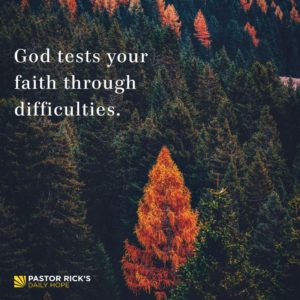 “You are temporarily harassed by all kinds of trials and temptations. This is no accident—it happens to prove your faith” (1 Peter 1:6-7 PHILLIPS).

Do you ever have days when nothing seems to go right?

I once heard about a guy whose apartment was flooded from a broken pipe in the upstairs apartment. His manager said to go rent a water vacuum, but he couldn’t—his car had a flat tire. He changed it and went inside again to phone a friend but got an electric shock from the phone. That startled him and he unintentionally ripped the phone off the wall. During that time, the water damage had jammed the door to his apartment, so a neighbor had to kick down the apartment door. While all this was going on, somebody stole the guy’s car—but it was almost out of gas. He found the car a few blocks away and had to push it to a gas station to fill up the tank. When he got back home, he discovered that four of his canaries had been crushed to death by falling plaster in his apartment. After slipping on the wet carpet and badly injuring his tailbone, this guy began to wonder if “God wanted me dead but kept missing.”

Even if you’ve never had a day quite that bad, you’ve likely discovered that life is full of problems, pressures, and stresses.

Did you know that the Bible says we shouldn’t be surprised by life’s problems? It says, “You are temporarily harassed by all kinds of trials and temptations. This is no accident—it happens to prove your faith” (1 Peter 1:6-7 PHILLIPS).

If you are a believer, nothing comes into your life by accident. Everything is Father-filtered. The Bible doesn’t say everything’s good. But as Romans 8:28 says, “God causes everything to work together for the good of those who love God and are called according to his purpose for them” (NLT)—even the difficulties, the irritations, and the interruptions. They all have a purpose.

We don’t usually realize it when we’re in the situation and may not want to admit it afterward, but every problem has a greater purpose: God does it to prove our faith.

So how does God want you to respond to difficulties? James 1:2-3 says, “Consider yourselves fortunate when all kinds of trials come your way, for you know that when your faith succeeds in facing such trials, the result is the ability to endure” (GNT).

God uses difficulties to test your faith, and you increase in faith when you rejoice continually and keep a positive attitude in spite of things not going right.

When you remain grateful and positive and continue trusting God even in the middle of difficulties, your faith is stretched.